Tributes have been paid to John Durnin, the former artistic director of Exeter Northcott Theatre, who died last week after a short illness.

John, who died on Sunday (February 16), was also associate director at the Cheltenham Everyman Theatre and had most recently been the artistic director at Pitlochry Festival Theatre (PFT) from 2003-2017.

He worked at the Northcott from 1991 to 1998 and is credited with establishing the theatre’s annual tradition of Christmas pantomime.

Exeter actor and regular panto dame Steve Bennett said: “I had the pleasure of working with John throughout his tenure at the Northcott.”

“He had the vision to bring us Shakespeare in the gardens which gave me the opportunity to play Bottom, Toby Belch and Touchstone among others.

“He also started the yearly tradition of the Northcott pantomime and he also gave David Sterne and myself a platform to produce both regional and national tours of The Man Who Would Be King.”

During his nine years in Exeter, John directed around 40 productions, including the premieres of Robert Shearman’s Breaking Bread Together, Victor Haltar’s Elephant Herd, Paul McClure’s A Curlew’s Cry, and Philip Osment’s Flesh and Blood.

He introduced the annual panto tradition with Cinderella in 1996, followed by Jack and The Beanstalk in 1997.

Summer performances of Shakespeare in the Gardens began with A Midsummer Night’s Dream in August 1995, a show which involved lining and intentionally flooding Rougemont Gardens.

During his 15 years in Highland Perthshire, John helped deliver some of the theatre’s biggest ever shows including a record-breaking production of High Society. 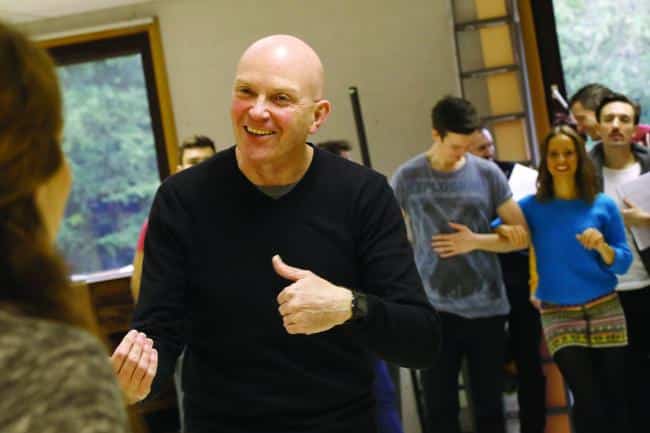 John in rehearsals at Pitlochry

He was also one of the key movers behind the return to the stage of Compton Mackenzie’s favourite Monarch of the Glen.

His swansong in Pitlochry was Singin’ In The Rain, which opened in December 2017.

At the time, he said he had taken the difficult decision to stand down. “It gives me the time and space to work out my next career move, though it will have to be something very special to rival my experiences at PFT,” he said.

“I will take with me many happy memories of this unique place, the vibrant working environment and the many wonderful productions we have created together.”

The theatre’s executive director Kris Bryce was also amongst those who paid tribute.

“John made a significant contribution over his 15 year tenure and, on behalf of everyone, I can say he was incredibly important to this special theatre,” she said.

“He was instrumental in creating a platform from which we can continue to thrive in the 21st century.”

“I am certain that this sense of loss felt at the theatre will be shared throughout the arts industry in Scotland and the UK.”

Local SNP member of the Scottish Parliament (MSP) John Swinney shared his condolences on Twitter. He posted: “I am terribly saddened to hear this news. John made an outstanding contribution to Pitlochry Festival Theatre.”

A spokesman for PFT added: “At this very sad time, everyone at the Theatre extends their deepest condolences to John’s wife, Jacqueline, and his family and friends. He will remain very much in our thoughts.”

Search the site using the form below